The reality is that big data volumes are growing exponentially. To stay within budget, CISOs are being forced to make difficult and risky decisions about which data they choose to protect—and not protect. LogRhythm introduced its unlimited data plan precisely because it believes CISOs shouldn’t be forced to restrict the amount of the data and what they protect. Not only does LogRhythm’s unlimited data plan allow CISOs to free themselves of these restrictions, it also lets them do so at a predictable price point, thus greatly lowering the risk of unprotected data. With the LogRhythm True Unlimited Data Plan, customers can have peace of mind knowing that they can add additional data sources to achieve complete visibility, implement new use cases, and scale as they grow — no tiers, fine print, or contract surprises.

“With unprotected data responsible for 3.2 billion breached records annually, LogRhythm’s model means our customers no longer have to sacrifice security because of cost,” said Corey Ainscough. “The unlimited data plan for LogRhythm’s XDR Stack makes it easy for organizations to get the appropriate level of security they need at a single consistent cost, no matter how much data they have in their environment. This offering represents a tremendous step forward in the fight against cyber threats.” Organizations that select LogRhythm will pay one price—and only one price—for their entire contract, enabling them to protect all their data, users, and systems, even if those numbers increase throughout the year, and even if their deployment architecture changes.

“2019 is set to be the worst year ever for data breaches, but how many of this year’s incidents could have been prevented if organizations had the ability to ingest and protect all of their data?” said Mark Logan, CEO, LogRhythm. “That’s why we created the industry’s first truly unlimited data plan for SIEM. With LogRhythm, CISOs no longer have to sacrifice security because of cost. Instead, they can now monitor and protect all their data while still staying well within their budget.”

The LogRhythm NextGen SIEM Platform combines patented machine-based analytics, user and entity behavior analytics (UEBA), network detection and response (NDR), and security orchestration, automation, and response (SOAR) in a single, unified architecture, delivered from the cloud or as an on-prem solution. The platform strengthens the maturity of security operations by better aligning a customer’s technology, team, and processes.

If you have any further questions, please reach out to Corey Ainscough.

Keller Schroeder’s mission is to provide our clients with the IT tools and services to improve business performance. That intention includes finding effective, time-saving methods to get you the IT products and information you need in the most efficient manner. With that focus in mind, we are excited to announce our new ecommerce website: Shop.KellerSchroeder.com.

Shop.KellerSchroeder.com was developed to meet a specific, increasing need among a number of our clients. They were looking for a quick resource that allowed them to research products, check availability, and compare the specifications of products.  PLUS, once they had made their buying decision, they wanted the opportunity to go ahead and place an order immediately. This is especially true for commodity-type items (i.e. laptops, components, accessories) where a traditional quote and design from our team is often unnecessary.

With this site, we are making those types of simple orders even easier, and it provides a convenient way to do business with a company that you already trust. Do you know exactly the product you need? Search for it and place your order on Shop.KellerSchroeder.com. Do you want to compare specs on products to see what best fits your needs and environment? Research it on Shop.KellerSchroeder.com. Do you need to determine what solutions and gear will fit within your budget? Take a look at Shop.Keller Schroeder.com. 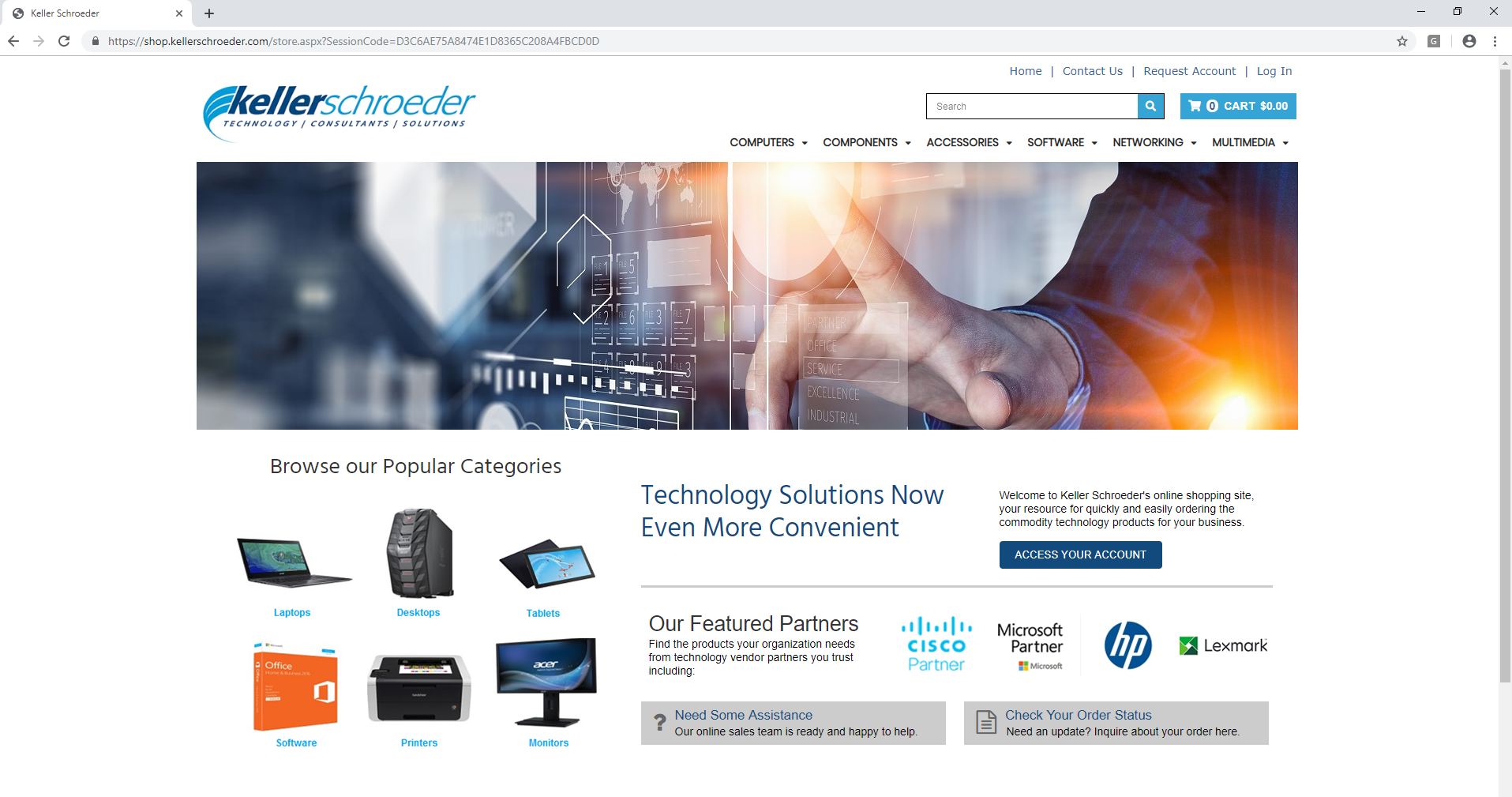 Upon entering the site, you will find a multitude of ways to search for products and organize search results. You will see real-time updates of availability directly from our distributors, along with any special promotions. This system also allows YOU to track your products once they have been shipped.  Plus you can use it anytime, day or night, 24 hours a day and 7 days a week.

As we are currently only issuing invoices for payment, our ecommerce site will initially require you to sign up for an account before you can place orders. It requires your team to fill out a simple form on the site, our team to validate it, and then you will be able to begin placing orders. For those who just want to peruse, all of the search and comparison features are available without an account.

We appreciate the opportunity to serve you and hope the new ecommerce website is an effective, time-saving way for you to make the purchases you need for your business. If you have any questions regarding Shop.KellerSchroeder.com, please reach out to your Select Account Manager or Graham Paxton, Keller Schroeder’s Inside Sales Manager, at onlinesales@kellerschroeder.com.