Now that we have our server side and management PC configurations ready for the upgrade, we’ll need to look at the client side. You will need to have Outlook 2007 Service Pack 3 or newer for Windows workstations. You will need Entourage 2008 or newer for MacIntosh systems. The redesigned Outlook Web Application supports the current version of all major browsers: Internet Explorer, Firefox and Chrome on Windows XP SP3 and newer. It also supports Safari, Firefox and Chrome on the Mac. Chrome version 24 or newer can even support offline access to the Outlook Web Application for when you are on the go and without an internet connection!

Exchange Server 2013 has a number of new features that will benefit any organization whether you are new to Exchange or migrating from a previous version. Some highlights include:

For the latest information on system compatibility please read the Exchange 2013 System Requirements.


For any questions regarding preparing for and executing a successful Exchange Server 2013 implementation, contact your Keller Schroeder Sr. Account Manager.

Your Last Check Up Was When???

Most people understand the vital importance of routine medical checkups. Regular health exams and testing often help pinpoint problems before they begin. Not only do exams and checkups help with early detection of existing problems, professionals who perform them help to greatly reduce the occurrence of future problems by recommending mitigating actions based upon the findings. We all have grown to understand this as a requirement to live a long, healthy, and productive life.
Why is it we all don’t treat our information systems networks with a similar level of protection and importance? Information systems are the lifeblood and backbone of most successful businesses. When the flow of information stops, business degradation begins. Business interruption caused by malware and cybercrime continues to increase at alarming levels. It is imperative for businesses of any size to ensure robust IT security is in place, in order to prevent becoming a victim of cybercrime. Consequences of not doing so include business interruption, legal compliance issues, loss of revenue, reputation impact, or worst case, complete business failure.

Keep your IT infrastructure ‘heart’ pumping and data ‘blood’ smoothly flowing by routinely testing the security of your network computing environment. Much like a body has multiple components to diagnose and keep running smoothly, so does a network infrastructure; from the web browser, to the server, to the Internet facing network infrastructure.
Do you want to get a glimpse of your current security posture? Here are a few security health check tools available from Qualys that you can check out for free!
And if you’re not routinely having the security of your network reviewed, it may be time to schedule that check up. Our Security Practice can help. If you would like to learn more, be sure and ask your Keller Schroeder Sr. Account Manager for more information.


Today’s high density & rapidly growing virtualization environments are putting a heavy strain on storage systems. Traditionally, the only way to meet the growing demand for application performance was to add more hard disks to provide more Input/Output Operations per Second (IOPS). While server technology has been following Moore’s Law of doubling improvement every 18-24 months, hard disk technology has stayed relatively flat. NetApp storage first tackled this challenge in 2009 by offering FlashCache PCIe cards for NetApp controllers to cache read IOPS in faster Flash Memory. This improves latency for random reads and works best for file based protocols like CIFS and NFS, but doesn’t help as much with writes or block protocols like FC & iSCSI.


The next big game changer in storage performance is Solid State Drives (SSD). SSDs have been around for years, but are now becoming more reasonably priced for enterprise storage solutions and are capable of 40,000 to 100,000 IOPS for random read/write workloads, which makes them perfect for the highly randomized workload that a virtual environment generates. NetApp has embraced SSD technology in a couple of different ways. 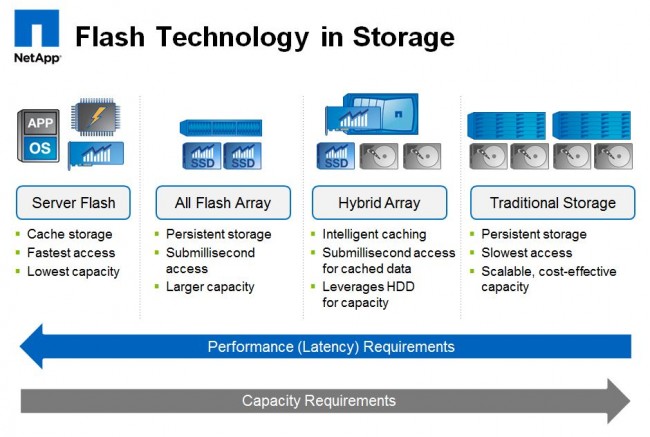 SSD drives can be used with NetApp storage as very high speed storage or as front-end cache for traditional hard disk drives (HDD). The latter is where we’re seeing the most widespread and effective usage. NetApp developed this hybrid disk solution using SSD & HDDs in 2012 and called it Flash Pools. You can purchase the SSD disks separately or even buy a mixed tray that contains both SSDs and HDDs. You can then create an aggregate where the SSDs’ cache reads and writes for that aggregate’s HDD disks, vastly improving performance for any workload on that aggregate from block to file protocols. Intelligent caching leverages the high performance of SSDs with the high capacity & low cost of HDDs and allows your company to get significantly more performance out of fewer disks, thus reducing the cost/IOP as well as space, power, and cooling requirements.


For the most demanding high performance applications, NetApp introduced a couple of additional options. FlashAccel is a Fusion-io PCIe card that can be installed on the server side of the equation, such as a Cisco UCS running VMware ESXi. This option puts a datastore in a virtual storage layer closest to the application providing the lowest possible latency, and less distance equates to less latency. Although it is the highest performing storage cache, it is also the lowest capacity caching.

NetApp has an SSD or Flash cache solution to improve storage performance for every situation, from the most demanding database applications to the typical high density virtualization environment. The sweet spot that is most appealing to the masses today are Flash Pools, adding SSDs as cache to existing hard disk aggregates. This offering is the most scalable and cost effective solution for improving storage performance without breaking the bank.

The title of Brad’s keynote address was ‘Compliance is NOT Security!’ The theme centered on the importance of understanding the difference between ‘checkbox security’ and best practice framework based security. He discussed how, over the past several years, he has seen far too much emphasis placed on passing compliance audits and not enough energy invested in actual security and asset protection. His message was clear that it is imperative that security is baked in from the beginning and not an afterthought.

The conference coincides with the Murray State Telecommunications Systems Management Awards Luncheon, where awards are presented to recognize outstanding students and industry individuals. Brad was selected as the 2013 recipient of the Nathan B. Stubblefield Award for Distinguished Lecture Series.

Phil has over 27 years of experience in the Information Technology field. His career has spanned Product Distribution, Financial, Manufacturing, and Healthcare environments. Early in his career, he was a COBOL and Assembler Application Programmer/Analyst in MVS and z/OS mainframe environments. He has experience installing, maintaining, and supporting an extensive environment on a Parallel Sysplex. Phil has managed DASD and tape environments of IBM, StorageTek, and Spectra equipment. He has extensive experience in the development of storage, backup/recovery, and disaster recovery plans. Phil has also been responsible for OS installation, maintenance, and hardening of AIX/ Linux. Since joining the Keller Schroeder systems team in 2008, Phil has broadened his experience by specializing in VMware virtualization technologies, NetApp SAN deployments, and backup/recovery solutions. Phil is a Senior Consultant.

He and his wife, Vicki, have been married 30 years.  They have one daughter, Megan, a sophomore at U of E. They are active at First Southern Baptist Church where Phil is a Sunday school teacher, deacon and trustee.  He enjoys martial arts, volleyball, softball and watching NCIS.

Contact your Keller Schroeder Sr. Account Manager to learn more about Phil and how you can leverage his experience and skills to benefit your organization.

Where are you today on the learning-earning-returning continuum?

This progression, when referenced in business and career contexts, suggests we spend the early years of our career learning, followed by a more financially-productive mid-career stage, after which we experience a late-career season of mentoring and charitable giving made possible by the success of the first two stages. Often the stages are assumed to be tightly correlated with age and years of experience in the marketplace.


Not a bad way to look at it. Typically we do earn more after we learn through education and experience. Certainly there is a deeper well of resources we can draw from in giving away more wisdom or money as we experience more of life’s challenges and accumulate financial assets. Few would dispute that this is a reasonable progression, accepting that there is overlap between the stages, and that the time required for reaching and passing through each stage varies widely.

The fallacy of this outlook is how we view the timing for stages one and three – learning and returning. Most of us “get” the earning part – stage two. We know what is necessary to equip ourselves to make money, and we are motivated to earn so we can meet current needs and dream and plan for the future. The danger emerges when we think we are too far along in our career or age to learn, or when we think we are too young or poor or inexperienced to “return”.

The most pitiful of conditions is not to know little, but to think there is little left to know. I am not interested in working with 25-year-olds or 55-year-olds in my organization who are not passionate about learning. Henry Ford said, “Anyone who stops learning is old, whether at 20 or 80.” Too often, as we grow and learn, we add to that a certain arrogance that makes us skeptical or resistant to reconsidering what we know, or being open to new thinking. This tendency is sometimes magnified when the new thinking or new ideas come from younger colleagues.


On the flip side, as we enter our careers and direct our energies toward learning and earning, we can mistakenly assume we do not have time or money or experience to return to others along the way. As a 50-something Dad, I am having a lot of fun being challenged and sharpened by my 20-something kids. Unencumbered by some of my biases and generational assumptions, my adult children (and yours) have the potential to return much as they begin learning and earning. And, while they do not have the financial resources I possess today, there are plenty of opportunities to practice financial “returning“ (e.g. www.kiva.org and www.compassion.com) with as little as $25, or mentoring (e.g. www.bgca.org and www.bbbs.org) with the life skills they already have in hand – today.


So why would we not be learning and returning, while we are earning, at all times? Why not today? We are never too old to learn, and we have no promise we will be here tomorrow. As lifelong learners, we make ourselves and our organizations better. As everyday “returners”, we give of what we have and make those around us richer. Sounds like a good deal to me.

University of Southern Indiana student James Mott was awarded the Keller Schroeder Technology Scholarship at the USI College of Business Honors Convocation on April 1, 2013. This is the seventh consecutive year that Keller Schroeder has funded this $1,000 scholarship, which goes to a sophomore or junior CIS/CS major with strong academic performance who shows involvement in University, student, or professional organizations, and community service or serving/learning activities.